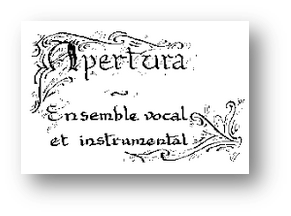 This high-quality ensemble is headed by Mr. Jean GOUJON.
His repertoire is based on works from the sixteenth and seventeenth centuries.
This ensemble has played twice for the exclusive benefit of our association
We thank this ensemble for its support to our association 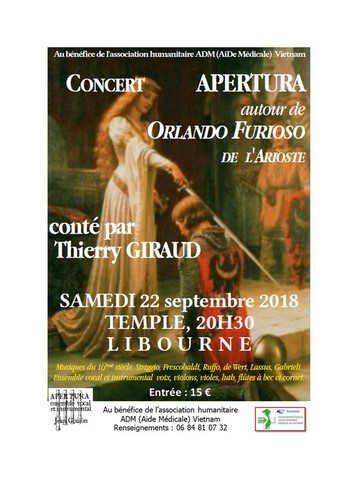 Zoom
On Septembre 28th, this concert was animated within the walls of the temple of Libourne by the vocal and instrumental ensemble APERTURA of Libourne, directed by M. Jean GOUJON, for the benefit of our association.
This ensemble plays works from the sixteenth and seventeenth centuries. This evening was more particularly devoted to the work of Orlando FURIOSO, of the Aristotle, Italian poet of the early sixteenth century.
The different madrigals were interspersed with stories of Roland, during the war between Charlemagne and the sarrazins, narrated by Thierry GIRAUD, storyteller.

This event, of very high quality, delighted the participants.

Thanks to the vocal and instrumental ensemble APERTURA of Libourne for its generosity as well as to Mr Joël BLOCH, representative of the Consistory of the Temple of Libourne who put his walls at our disposal gracefully.

The profits will be used exclusively to finance this operation 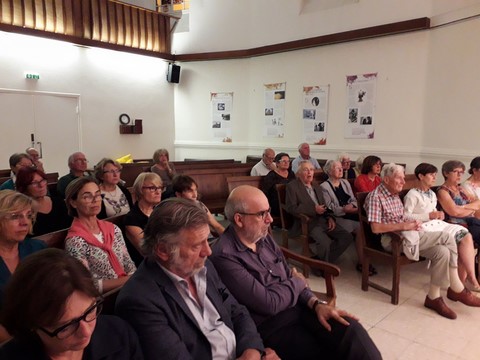 Photos
Without forgetting our member members for the preparation and organization of this event.

On March 5th, the vocal and instrumental ensemble APERTURA of Libourne, directed by M. Jean GOUJON, delighted us with its concert in the church of Lalande de Pomerol which transported us through the capitals of Europe in the 17th century with a music by Philippe MONTE.

Thanks to the vocal and instrumental ensemble APERTURA of Libourne for its generosity and to the members of ADM Vietnam Aquitaine present for their support. 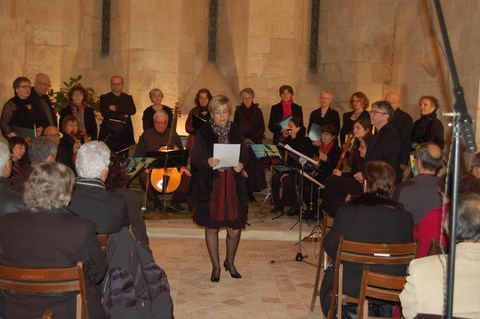